In Dinteloord (North Brabant) the Tuinbouwontwikkelingsmaatschappij (Horticultural Development Company) (TOM) has realised a high-quality, sustainable freshwater provision system for the ultra-modern greenhouse horticultural area of ‘Nieuw Prinsenland’. Supplying freshwater for the 260 hectares of glass in this salinising environment, where freshwater inflow is limited, was a major challenge. However, the effluent from the neighbouring sugar factory, coupled with innovative subsurface storage, offers a solution thanks to a TKI Water Technology project of TOM with KWR.

The continuous availability of freshwater of very good and reliable quality is a precondition for modern intensive greenhouse horticulture. But for Nieuw Prinsenland, which has been under development since 2010, this availability was not self-evident. Although the water needs are largely satisfied through the collection of rainwater and its storage in surface basins, serious shortages arise during drought periods. The inflow of surface water to the area is limited, while the groundwater is brackish and is not naturally recharged. An alternative source needed to be found. TOM’s Director, Piet Janmaat, remarks that ‘there remained the option of water-truck transport, so that’s what we did.’  TOM chose to use the effluent water from the neighbouring sugar factory. The plant processes sugar beets into sugar from September until the end of January, an operation that releases huge quantities of water. With treatment, this water can be transformed into high-quality freshwater. But the problem remained: where do you put the water in the months before you need it?

This need to chronologically ‘bridge’ supply and demand increasingly hampers the efficient (re)use of freshwater. For TOM, storage in surface basins was the obvious answer, but it came with drawbacks like high costs (about 1 euro/ m³), extensive spatial needs, and the possible deterioration of the water quality during such ‘open storage’: warming, algal growth, atmospheric deposition or even sabotage. In the meantime, successful systems for subsurface storage of rainwater for greenhouse horticulture were pilot tested in South Holland. These involve installing groundwater wells in deep sand layers using aquifer storage and recovery (ASR). This inspired the research carried out within TKI Water Technology to determine whether and how ASR could be used for the subsurface storage of the treated effluent in Nieuw Prinsenland.

Suitable locations for the ASR wellfield were identified in the plan area, taking into account the soil structure, groundwater quality and surrounding infrastructure. A fully automated installation was then designed and built, allowing for the injection of the supplied treated effluent via the ASR wells and the automatic supply of the recovered water to the horticulturalists when demanded. In 2016 an initial pilot was conducted at the most suitable location, situated in an ecological connection zone, involving one ASR well and the storage of almost 10,000 m³ of treated effluent. After six months of storage in the subsurface, the water, which was still of excellent quality, was successfully recovered.

On the basis of the TKI project’s results, TOM decided to commit entirely to ASR. In the autumn of 2016, another 25,000 m³ treated effluent was stored, allowing for the ample supply of water during the very dry spring of 2017 to local horticulturalists. During the same spring, the wellfield was increased to four ASR wells, which will enable the supply of 100 m3/hour in 2018. As expected, the costs of this storage method remain under 0.4 euro/m3 and the spatial needs are virtually nil. For TOM, ASR and water reuse therefore make for a very logical and economically attractive combination. 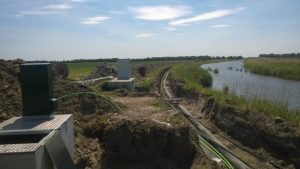 Extension of the ASR wellfield in 2017.